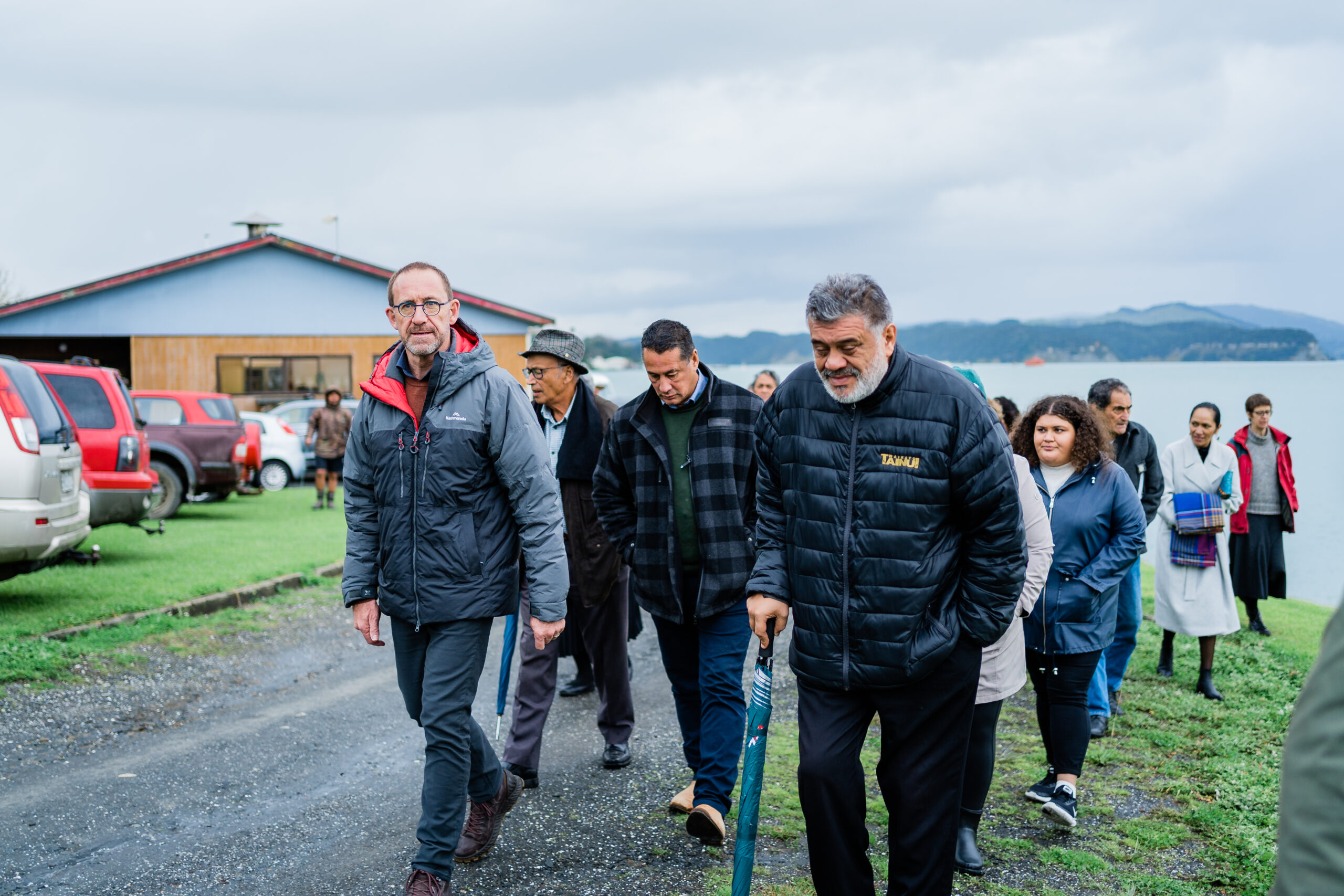 On a cold and rainy-day Kaawhia and Aotea Moana whaanau came together to host the Hon Andrew Little, Minister for Treaty of Waitangi Negotiations and his team as part of the Waikato-Tainui Remaining Claims settlement.

The Minister was invited to the harbours so he could develop a better appreciation for the stories and histories of the area, deepen his connection to the moana and the whenua, and better understand the iwi and hapuu perspective.

As the convoy of vans wove its way up Kaawhia Road to the look out, the rain dissipated, and the mist lifted enough to reveal Te Uukaipoo o Tainui Waka – the home of the Tainui waka.

Waikato-Tainui Negotiator Rahui Papa stepped out of the van and gave a brief koorero to the Minister. The hazy view was not the postcard version of the harbour the Minister would have seen in pictures, but it was an appropriate start to a journey that would provide a different perspective of the whenua, and the moana. 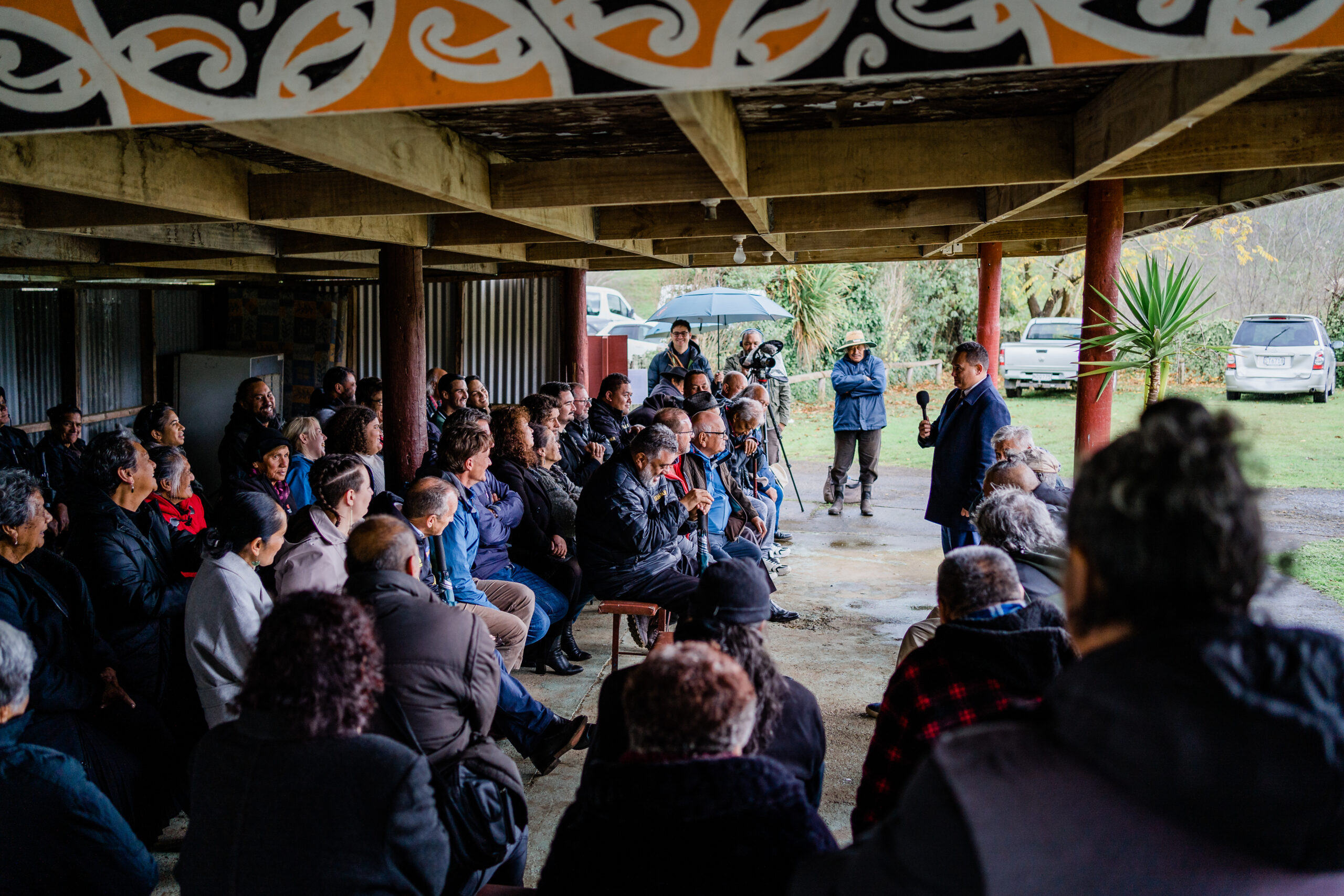 “When we got to Tirohanga Kaawhia, although it was misty and drizzly you could still see the mouth of the harbour, and really you could feel some of the wairua coming forward,” said Rahui.

At Kaawhia, the group was welcomed onto Maketuu Marae. Sheltered away from the rain, in the warmth of Auaukiterangi, whaanau shared with the Minister their concerns and their aspirations for Kaawhia harbour.

As the koorero flowed from speaker to speaker there was a clear and repeated call for a unified approach to looking after the moana, the whenua, and their communities.

“We must work together because the outcome we are seeking is the health and the wellbeing of our moana and of Kaawhia Harbour. The only way we will achieve that goal is for us to work together,” said Keith Ikin from the Ngaati Maniapoto Maaori Trust Board. 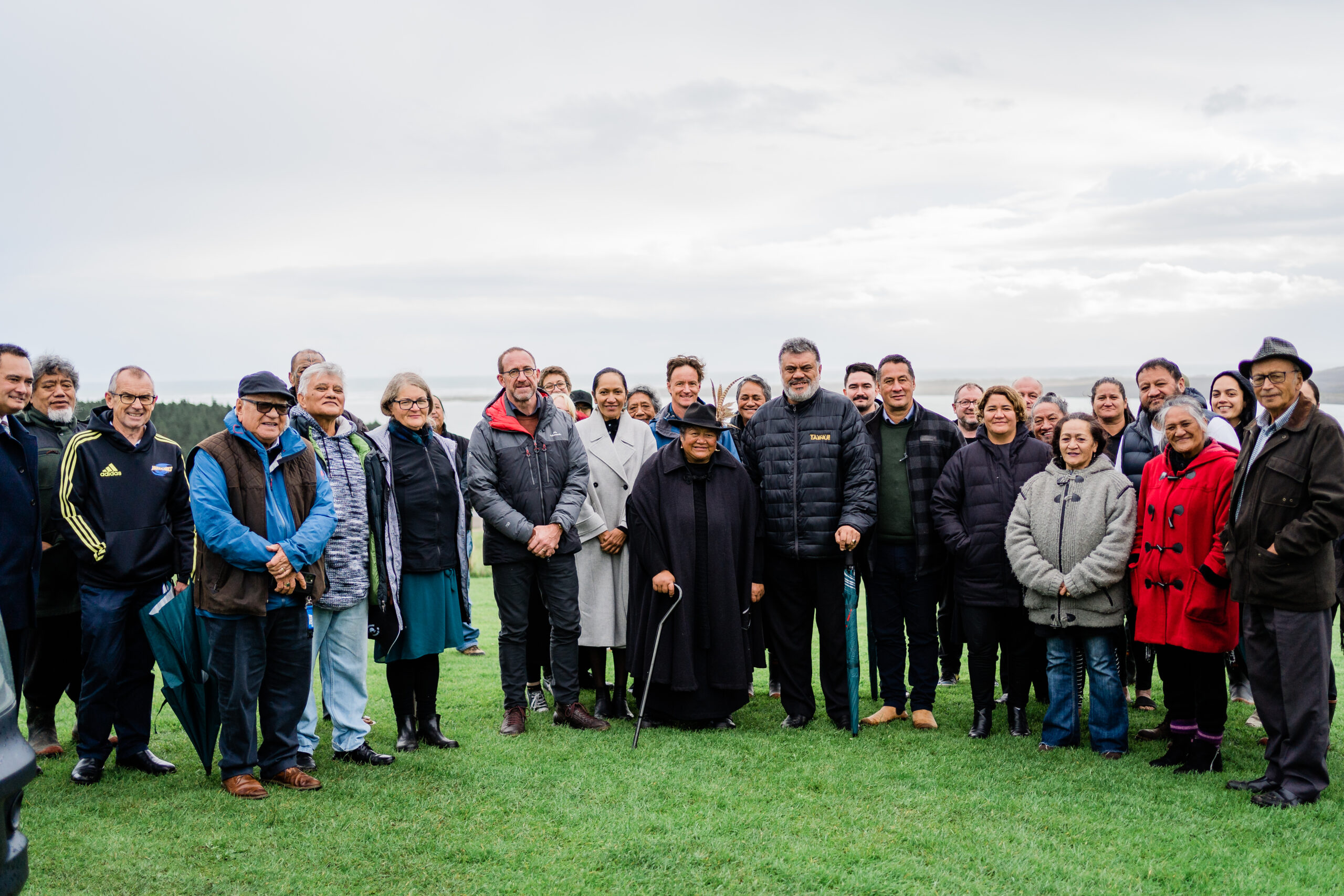 “We have to work together as iwi, we are all interconnected, we all whakapapa together, we are all part of the moana, so we are really keen to progress along that path,” he said.

Outside, the bad weather alleviated enough to allow the group to take the Minister and his team up the hill to the resting site of Te Waka o Tainui. Here whaanau provided further context to the Minister about the environmental, economic, and social changes they have experienced over generations. 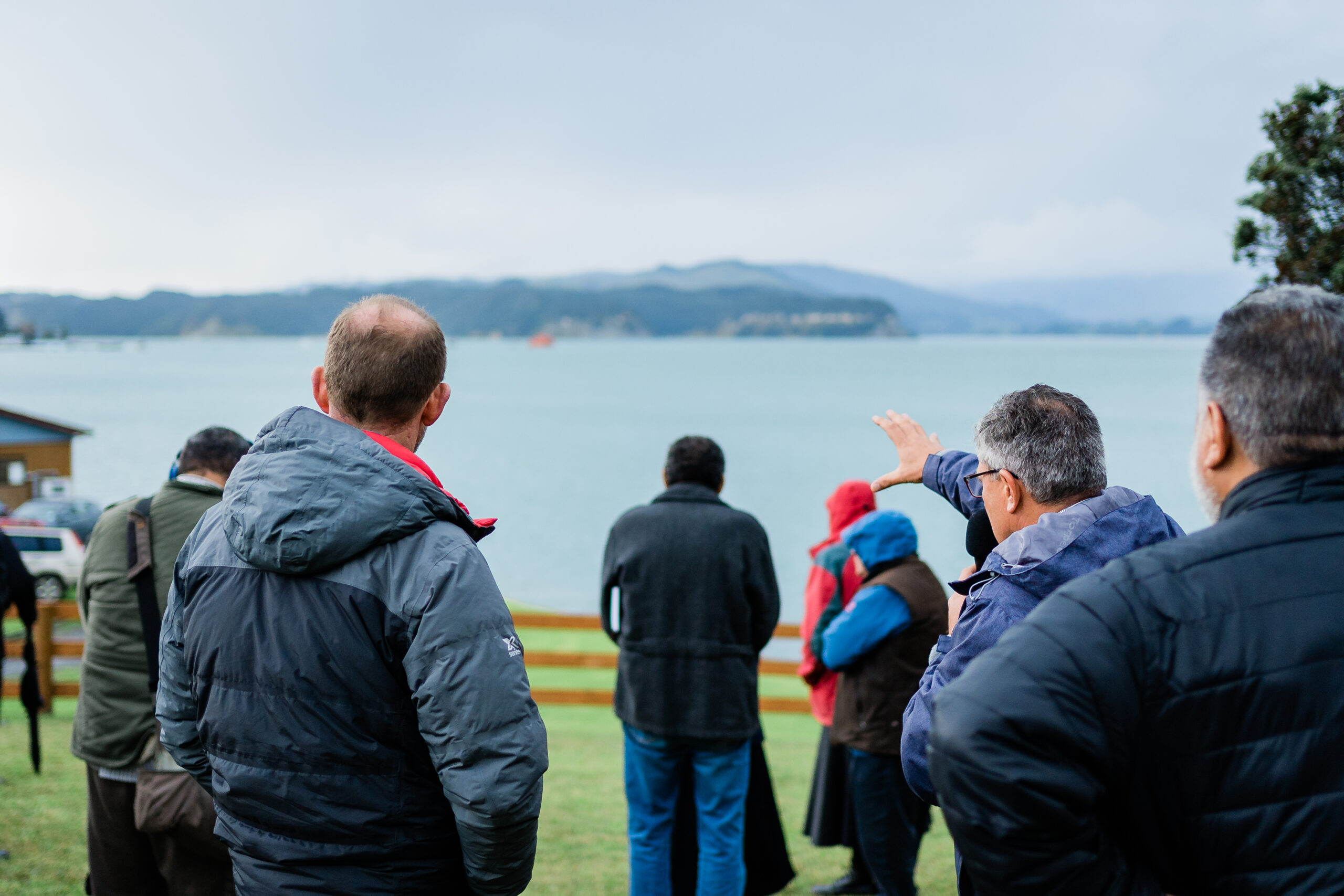 Standing on the hill looking down the harbour, whaanau pointed out the special sites to the Minister and his team, sharing the deep spiritual connection and long history they have with the area.

“Every blade of grass, every grain of sand, every droplet of the moana is of spiritual significance to our people,” said Rahui.

Leaving Kaawhia, the group travelled onto Ookapu Marae to hear about Aotea Moana and the aspirations for this harbour.

The rain returned and the group gathered tightly under the shelter at Ookapu looking onto the wharenui that is being redeveloped. Ngaati Te Wehi whaanau shared their koorero, which followed similar themes to those talked about at Kaawhia, albeit many aspects were more specific to Aotea Moana. 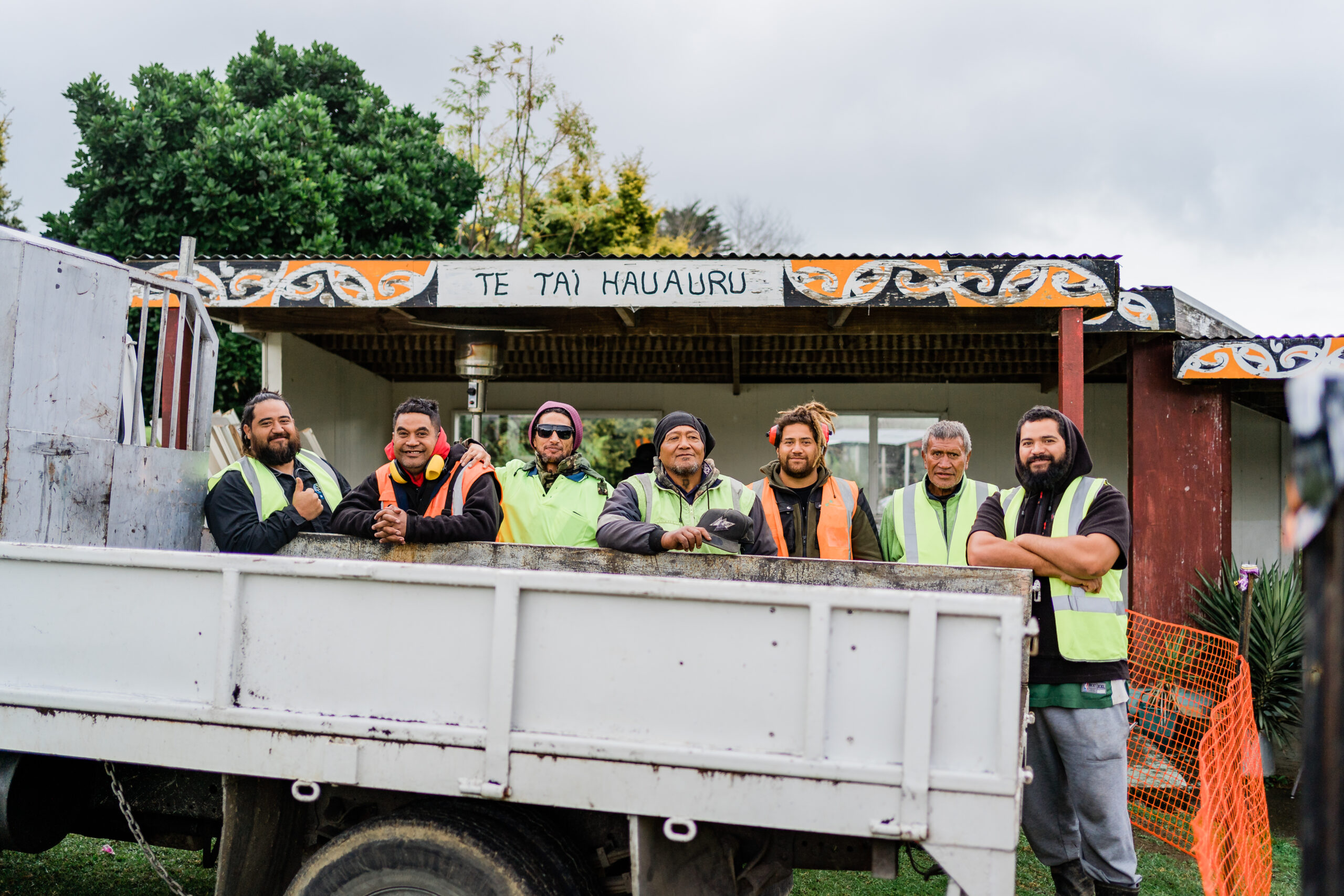 Some of the historical issues he discussed included the fact that during public works kooiwi were dug up, and urupaa were destroyed and desecrated. Furthermore, during the land development scheme in the 1960s, Paakehaa farmers who were brought in to manage the farms around the area forced Ngaati Te Wehi whaanau off their lands and bulldozed their homes.

He went on to explain that the contemporary impact is felt today in the lack of infrastructure and the insufficient housing around Ookapu.

Whaanau member Diane Bradshaw spoke to the Minister about the environmental issues at Aotea Harbour. She also spoke about some of the archaeological studies that reinforce the long and significant history whaanau have in the area.

She shared the koorero about Te Whakaotirangi, one of the wives of Hoturoa, who brought taro on Te Waka o Tainui and planted them at Hawaiki iti on the edge of Aotea Harbour.

Alongside Aotea whaanau, the Minister then visited this important site, to deepen his connection, and his understanding of the history in the area.

“It is the only living taonga from Tainui Waka that we still have today in our area,” said Rahui.

Aotea whaanau then journeyed with the Minister up to a vantage point where they could see out to the mouth of the harbour. Here they continued to share the historic koorero of Aotea and its connection with Aotea Waka, talked about the many kooiwi that have been found throughout the dunes, and the discovery of Korotangi, the famous taonga from the Tainui Waka.

The day concluded at Te Papatapu Marae where the Minister shared his reflections. 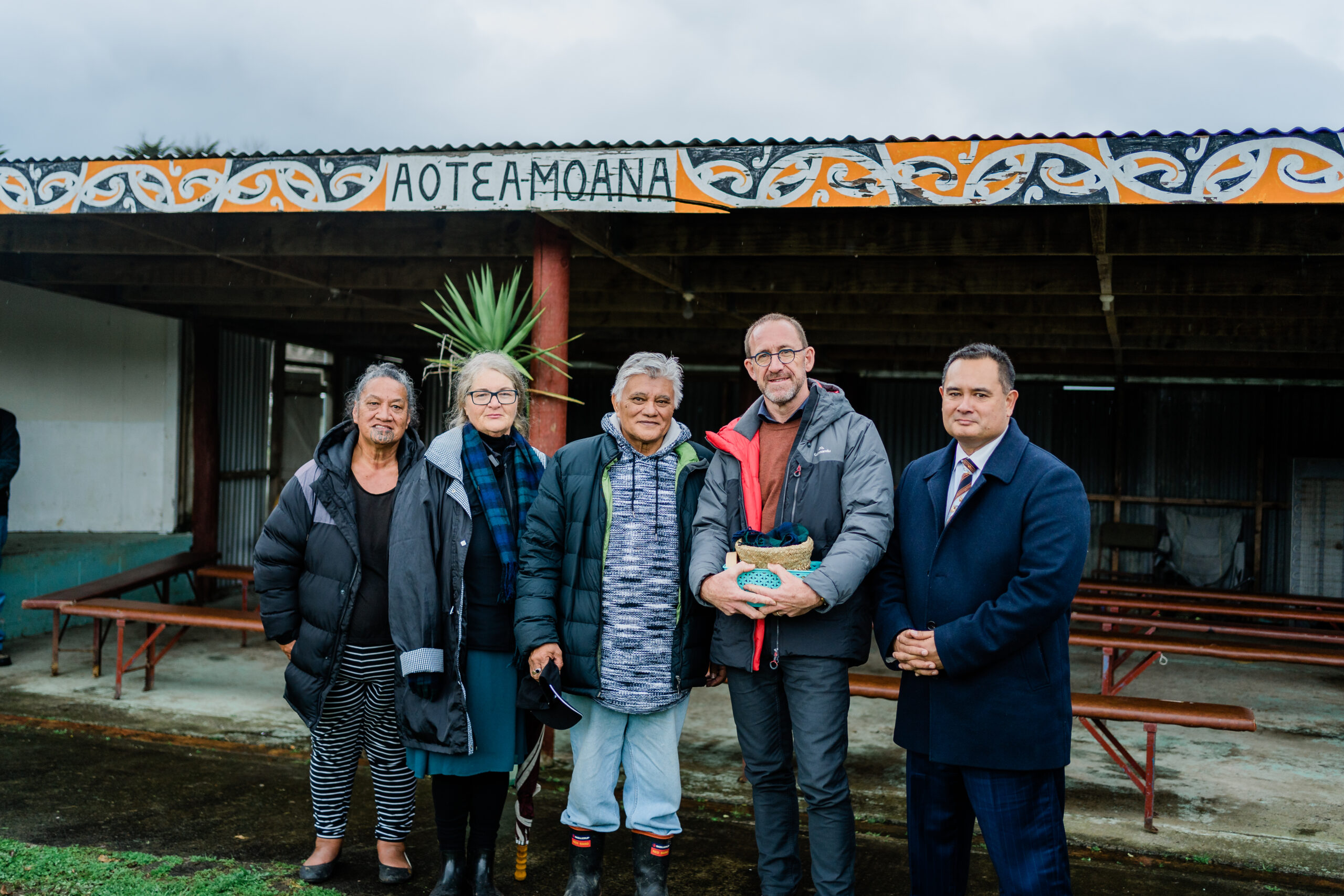 “At some point I am going to have to make some decisions, so it is important for me as a Minister to hear first-hand, and to see, and feel, and breathe the air here with my understanding as I make decisions. So, for me, it was an amazing day,” said Minister Little.

The haerenga provided the Minister with a new perspective and a better understanding of the spiritual connection between the people, the moana and the whenua.

“I think I have a clearer understanding of what some of the issues are, some of the hurt that the Crown has clearly now got to address in these negotiations.”

“I think also just understanding the spiritual connection with the moana, to those who live on its shores and on the whenua. It is important to understand that as well, as we engage in the dialogue, being respectful of that important connection,” he said.

Waikato-Tainui Negotiator Rahui Papa is extremely grateful to all the whaanau that made the time to come and meet the Minister and deepen his understanding. 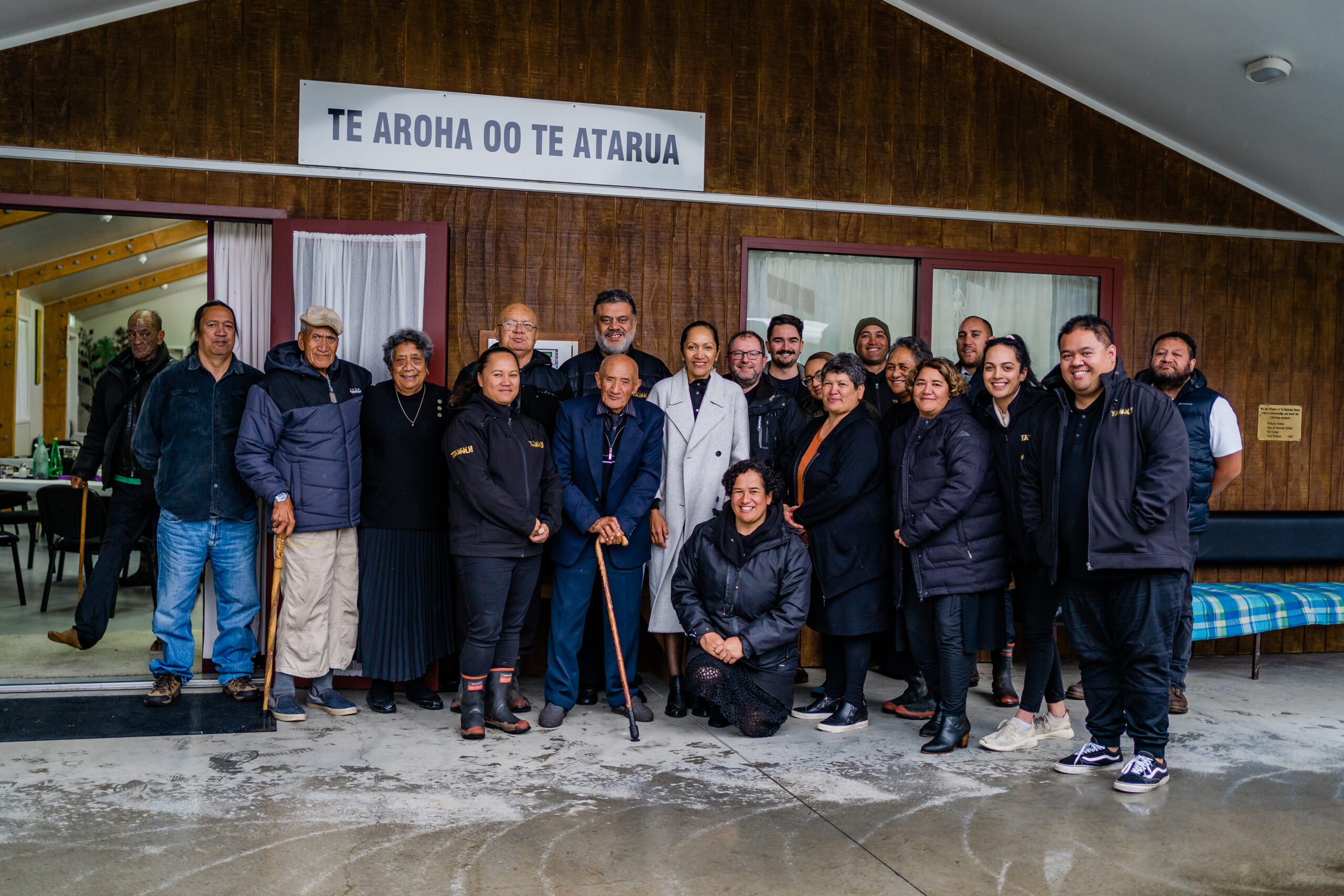 “To see the eyes of the kaumaatua, to hear the passion in the voices, to actually smell the moana, to feel the whenua, there is no substitute for that,” he said.

The Waikato-Tainui Negotiations Team supported by the Settlement and Protection team will be looking to secure more time with the Minister to do similar visits to Manukau and Whaingaroa Harbour.

“We expect to be working with the Crown for 12-18 months on drafting the deed of settlement, and we hope there will be opportunities for engagement throughout this period,” said Rahui.