We are incredibly blessed to have the leadership of Rukumoana Schaafhausen (from Rukumoana Marae), for such a time as this, as she courageously takes on the battle of protecting our taonga tupuna.

She is not only our Chair for the tribe’s Board (Te Arataura), she is also the Maaori King’s Representative. Rukumoana has been leading strong in the tribal space for many years and at the National Iwi Chairs Forum she was appointed to also be the Chair of the leading an all-iwi approach, engagement with the Crown to act and recognise Maaori rights in freshwater, including the proprietary and economic interests of Iwi and hapuu.

“Iwi have invested considerable time and resources over the past 12-years working with the Crown and stakeholders to promote the co-development of a durable and robust freshwater management framework,” says Rukumoana. “We have actively engaged in good faith with the Crown on every freshwater reform initiative the Crown has announced since 2007, with successive governments committing to progress the resolution of freshwater rights and interests. However, while we have made some progress on improving elements of freshwater management, the Crown has constantly stopped short of taking the fundamental steps needed to address the economic rights and interests of Iwi and hapuu.” 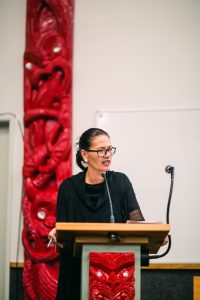 The recent release of the Waitangi Tribunal’s stage two report of Wai2358, National Freshwater and Geothermal Resources Inquiry is strong in their recommendations to the crown that they must fundamentally resolve iwi and hapuu rights and interests in fresh water.

Rukumoana added, “Iwi and hapuu are tired of being told by the Crown that “no one owns water” or that “everyone owns water” while we see our awa tupuna being mismanaged and in a highly vulnerable state throughout the motu”.

The Tribunal has also found that the present law in relation to fresh water does not comply with the principles of the Treaty, with inadequate provision for the tino rangatiratanga and the kaitiakitanga of iwi and hapuu over their freshwater taonga and Maaori interests all too often being outweighed altogether in decision-making.

“The Tribunal has confirmed what we all know to be the case; that New Zealand’s freshwater resources are under pressure, with degraded water bodies and over-allocation in many catchments and the situation is only getting worse. The Crown must act now and engage with Iwi and hapuu and other parties to co-develop meaningful reforms that will both address Māori rights and interests and improve the health and wellbeing of our waterways.”